History of the Sprinter Chassis

The Mercedes Benz Sprinter is often seen as the pinnacle of technology in its field, but Mercedes Benz has been innovating the industry since the beginning. The company actually invented the motorized van in 1896, with a model made for delivery services. As the decades went on, their models evolved to encompass the recreational vehicles and campervans we know and love today, with the L 319 starting the new trend in 1956. Other iconic models followed, like the TN lineup in the 1970s, and the T2 in the 1980s, celebrating the centennial of the automobile’s invention.

In 1995, however, Mercedes Benz once again reinvented the van, launching their first Sprinter model, although the first-generation Sprinter didn’t hit the US market until later, where they were first labeled as Freightliners or Dodges. Since then, Mercedes Benz unveiled the second-generation Sprinter in 2006, and the third-generation in 2019. The company has continued to update the specifications and amenities included with the chassis, adding high-end safety features, and top-of-the-line headlight systems and upholstery, as well as new options for four-wheel drive. Today, the Sprinter is still one of the best systems on the market, leading to its sustainability and popularity throughout the years.

The most current model on the market is the Mercedes Benz Sprinter chassis VS30 featured in many newer Sprinter RV rental models. The chassis is now equipped with even better fuel efficiency, with a 3-liter and 6-cylinder turbo-diesel engine, plus a 7-speed automatic 7G-Tronic plus transmission. Sprinters are known for top-of-the-line engine and carrying power, making them perfect for RVs and campervans. On this model, however, the safety features absolutely cannot be missed. The VS30 model includes features like Active Brake Assist, using sophisticated technology that will even brake for pedestrians ahead. Active Lane Keeping Assist keeps track of slight movements to keep you safe and in your lane while driving, while Active Distance Assist helps with cruise control, with customizable following distance settings. Other features include Traffic Sign Assist (even updating with local traffic laws), Blind Spot with Rear Cross Traffic Alert, Attention Assist, and Rearview Camera with Rear Park Assist. The headlights also get an update, with LED Performance Headlamps and Adaptive High beam Assist, as well as a Magic Vision Wet Wiper System for your windshield.

The interior also has plenty of luxury features, with swiveling and heated leather cab seats, and a state-of-the-art Infotainment Center, complete with steering wheel controls. There’s also a port on the dashboard for wireless, USB and 12-volt charging, so you can stay connected with your devices on the road. Just below, the Infotainment Center has capabilities for GPS, satellite and Sirius radio, Bluetooth, 4G LTE, hands-free calling, voice guidance and artificial intelligence, which also ties into all of the available safety features. In addition to customizing these safety features from the console, you can also adjust the lights throughout the cab. The console will even show you your vehicle’s stats, including fuel consumption and torque.

With all of this included in every Sprinter chassis, it’s no wonder that it’s one of the best and most beloved models on the market. 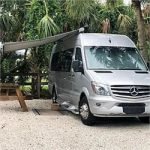 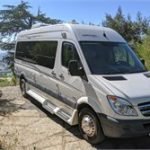 The Scoop on Sprinter Conversion Campervans 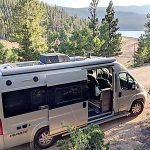 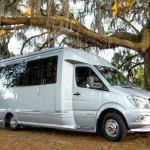